Just over a year ago, the post What is the Transition? Part 1 presented statistics and charts showing that there is an acceleration in extreme weather events and geologic changes. And there have been several posts with specifics, including these:

The Weather Gets Even Wilder

Britain faces choice of saving town or country from floods

This is a statistical update showing that this exceedingly important trend continues.

For starters, here is a chart from the world of yet another industry whose original intent–a way to spread financial risk that could overwhelm an individual to a wider community–has been perverted to massive investment pools from which any payment is not celebrated as a victory but is called a loss. Thus the chart of “Loss events worldwide 1980-2013” from the largest re-insurance company in the world, Munich Re. I use it so that any reader who might still be mired in “it’s just better reporting because of the internet” delusion about accelerating Earth changes–I heard of a person who still claimed that recently, so there must be more–can put that aside. So, not from the woo-woo world, but from the Mr. Gradgrind hard-nosed no-nonsense actuary-driven world where all things are calculated in currency and where the business model depends in great part on frightening people into buying more insurance than they need:

I added the cone lines highlighting the expansion of damaging floods (the blue portion of each bar) and storms (the green portion) from around 250 per year in the 1980s to around 700 per year for the last eight years. That’s a mighty clear indication of trend as opposed to outlier.

The chart does not show all damaging floods and storms, just those that caused losses for the insurance industry. The chart shows a similar acceleration in damages from “extreme temperature, drought, forest fire” (the yellow part of each bar).

It shows a fairly constant set of losses from geologic events, but this chart does not tell the true story of geologic events because, worldwide, very few have earthquake or volcanic eruption insurance, so there are relatively few loss events from these for the insurance industry.

According to those who closely monitor volcanic eruptions, these set a new all time record in 2013, with 84 volcanoes erupting, beating the previous record of 82 in 2010. There were even volcanic eruption clusters:

And then there was this “minor problem”:

Scientists find new volcano rumbling under Antarctica ice: 1,370 tremors: “It may blow or it may not. We don’t know.”

And with 32 volcanoes having already erupted this year, 2014 is off to a thundering and deadly start. After this in Indonesia:

Here is a video link to those tornadoes.

If I had all the data to chart volcanic eruptions, it would likely look very much like this chart of the 10-year average of earthquakes of magnitude 6.0 or greater, updated with 2013 data:

These days, the planet has one of these potentially damaging earthquakes on average every two and a half days, though more typically they come in clusters as well: 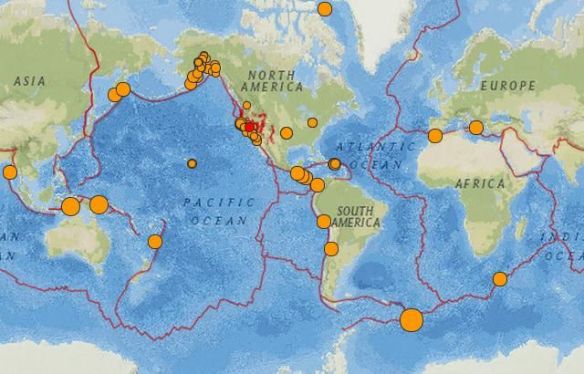 There were no significant tsunamis in 2013, so my previous comment from the end of 2012 still seems appropriate:

According to data at the NOAA Global Historical Tsunami Database, which has records going back to 2000 BC, there have been 34 tsunamis with a wave height greater than twenty feet over the last 400 years. Six of those, or 18%, have occurred since the year 2000…In the Twentieth Century, there was a tsunami with a twenty foot wave height about once every ten years. In this century, it has happened once every two years, resulting in the deaths of a quarter million people despite the fact that none of these tsunamis struck a major city.

Sinkholes have continued unabated, though in the rain-drenched UK, there have been multiple large land movements: 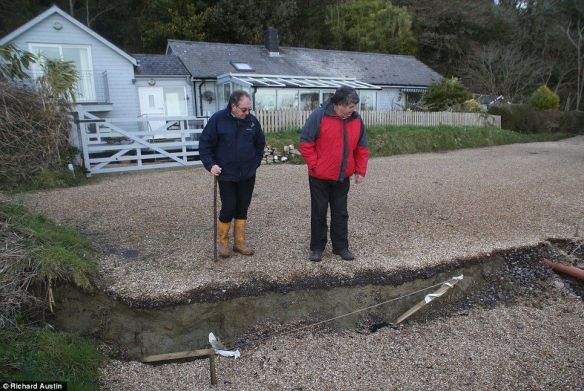 And given that the world saw a very strange outbreak of mid-Winter brush and forest fires:

Are ‘drought conditions’ really to blame for winter wildfire outbreak across U.S.? Wildfire breaks out in Florida marshland‏

Another wildfire in Norway: Fire on Norwegian coast destroys 140 buildings

it seems I would be remiss in not mentioning that meteor fireball sightings have been increasing dramatically in recent years. Confirmed sightings doubled from 2011 to 2013:

Do I report all this to frighten? Not at all. I report it because it is the reality in which we are living; because I have learned the hard way that standing firm in the face of nasty powerful trends is very high risk behavior and usually turns out poorly; and because I want those who read Thundering Heard–who are presumably open to the idea that the accelerating changes we are seeing in most fields of life are related and are very important for humanity and for each of us–to stay alive so that, after the collapse of the financial system, they are ready to help rebuild society based on principles that include wisdom, creative intelligence, and compassion rather than the rampant and self-defeating materialism that is disintegrating our precarious “civilization.” (The quotes around civilization refer to Gandhi’s remark: “What do I think of Western civilization? I think it would be a very good idea.”)

So as I say to my younger cats when they bound out the door at night to face the local wildlife: Be careful out there.