The Chevy Volt–explained earlier in In Praise of Plug-In Vehicles–has delivered 150 miles per gallon (1.5L/100km) in real time since it was purchased. This is not some biased guess on my part, the car tracks these things for you. Here’s a dashboard readout from this week: 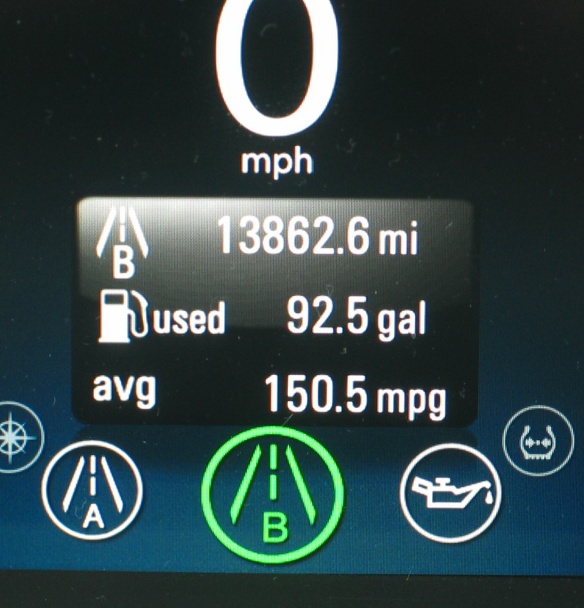 And for those who live in rational countries (if there are any!) that use the metric system:

Now, if only the electric charging were powered by solar or free energy! That will come. By Bloomberg‘s calculations, the world is on track to install 35 times more solar photovoltaics in 2014 than it did in 2006 (52 gigawatts in 2014 versus 1.5 gigawatts in 2006). In the US, the perfect exponential chart of increases in solar electric installed capacity looks like this: 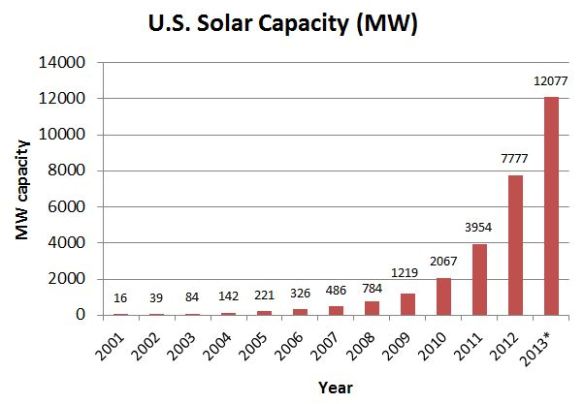 The chart is from the next link, which includes a quote about about solar panels costing 1/10th of what they did in 1998:

Massive growth of wind and solar in the USA

In the United States, the annual installed solar PV capacity has grown ~55% per annum since 2001…

The decrease in installed costs can almost entirely be attributed to the drop in module prices, which fell from $5/Watt in 1998 to ~$0.5/Watt in 2013…

The coming era of unlimited — and free — clean energy

Futurist Ray Kurzweil notes that solar power has been doubling every two years for the past 30 years — as costs have been dropping. He says solar energy is only six doublings — or less than 14 years — away from meeting 100 percent of today’s energy needs. Energy usage will keep increasing, so this is a moving target. But, by Kurzweil’s estimates, inexpensive renewable sources will provide more energy than the world needs in less than 20 years. Even then, we will be using only one part in 10,000 of the sunlight that falls on the Earth.

OK, so there’s no way that the economy will hold together long enough to produce the investment in solar Kurzweil expects over the next 14 years, but the technical trend is very clear, even if the installations don’t take place with continuing straight-through exponential growth.

In rich-in-sunshine Australia, solar is definitely on track to overtake coal:

Solar has won. Even if coal were free to burn, power stations couldn’t compete

And there are lots of links on the situation here:

We Could Power All 50 States With Wind, Solar and Hydro

The big oil, gas, coal and nuclear companies claim that we need those energy sources in order to power America.

Of course, the naysayers, often well-funded by the Koch Brothers or the fossil fuel companies, claim that for solar to provide all of our electricity, we’d have to cover some humongous percentage of the Earth’s surface to do it. Here’s what it actually looks like based on needs projected out to 2030 (as always, you can click on the graphic to enlarge it): 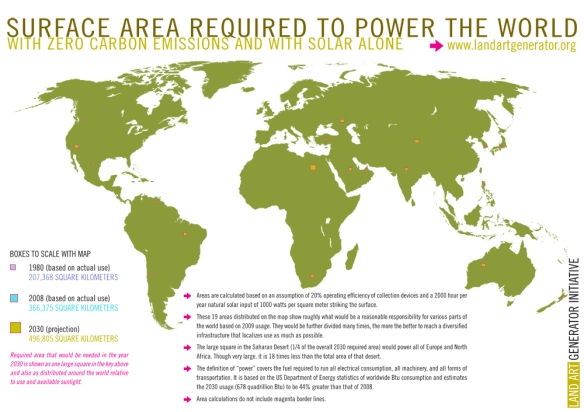 And I think we can look forward to the dogmatic branch of the scientific community being proved wrong again when truly free energy devices emerge, though Alice Bailey’s book The Externalization of the Hierarchy, written in the 1930’s and 1940’s, says that won’t happen till fairly soon after 2025. I can’t wait!

Over the last three days, I’ve driven a car 150 miles without burning a drop of gasoline. That is quite a pleasure. Here’s how it happened.

On Aug 6, I wrote that the war drums were getting louder. So I reviewed my own preparations for the transition, this time focusing on energy and transportation. And I came face to face yet again with my own pitiable dependence on the oil cartel for transportation.

So I signed up for the daily e-mail from Green Car Reports, an excellent site covering advances in automobile transport via hybrids, plug-in hybrids, and fully electric vehicles. And I contacted an extremely knowledgeable and very friendly fellow named Gordy who heads the Panhandle Electric Vehicle Association and converts vehicles with internal combustion engines to electric vehicles.

While doing my research, the war drums got much louder with events appearing to take place in the following order: troops entering Syria accompanied by the CIA as reported by Le Figaro; then a UN team of weapons inspectors arrives in Syria to test for evidence of chemical warfare; and then there just happens to be a poison attack in Syria that kills hundreds. Followed (of course?) by a report by the Wall St Journal that the US is refining its military options in Syria.

Which “kind of” ups the ante: If there is all-out war in the Middle East, how long before the price of gasoline doubles, or worse? Or gets rationed, or is simply unavailable at times?

So I looked at the available automobile products, which fall into three general categories:

1. Existing hybrids, like the Prius, that get modified by the addition of a small battery bank that enables a person to drive a small number of miles on electricity alone after the battery bank has been charged. For example, with the plug-in Prius, Toyota claims a person can drive 6 to 11 miles on electricity alone before the gasoline engine kicks in. Reviewers claim that this is actually 5 to 6 miles.

2. Newer hybrid designs like the Chevy Volt and Ford CMax Energi that have larger battery banks that offer 38 miles on electricity alone for the Volt and 18 miles for the CMax Energi, after which a gasoline engine takes over.

To be honest, I would have been happy to fully investigate Category 3, but I live in the Town of Boondocks just east or north or south or west of the Middle of Nowhere, and no one sells or services those cars around here.

And Category 1 seems like afterthought design that offers little benefit for a large increase in price, at least for my driving needs.

So I pursued Category 2, and am I ever happy it turned out that way. For those of us who have had very low expectations of General Motors for decades, the Chevy Volt is a very pleasant shocker.  Here’s how it works: The Volt has a sizable battery bank (16Kw) that powers an electric motor that propels the car. If one does not drive aggressively, one can go 50 miles on a single charge of the battery bank. If one drains the battery bank and continues driving, a 1.4 liter gasoline engine kicks in and acts as an electric generator, powering the electric motor that propels the car. So either the battery bank drives the electric motor, or a gasoline generator drives the electric motor. So if you want to drive straight across the US, you can do that, though most of the trip would be done with the Volt running on gasoline. This is a huge advantage over the all-electric cars in Category 3 which would need to drive the 100 miles or so (more for the far more expensive Tesla’s) that they can attain from a single charge, followed by a multi-hour period of battery re-charging before further progress could be made.

With the Volt, if a person drives less than 50 miles a day, they never need to buy gasoline, they can just plug the car into a standard (in the US) 120 volt outlet and the batteries recharge in about 10 hours, typically overnight. If there is a 240 volt outlet available, the recharge takes four hours, which would allow a person to drive 50 miles on electricity alone multiple times a day. But there is no “range anxiety” with the Volt as there is for the all-electric cars where a person sometimes ends up wondering whether they will get to their destination before running out of electricity.

The published all-electric mileage capability of the Volt is 38 miles, not 50. And I think that would likely be correct if one drives aggressively or at 70 miles per hour for the entire trip. But with non-aggressive driving averaging 35 or 45 miles per hour, 50 miles is attainable on a single charge.

These vehicles are more expensive than their gasoline-only counterparts. To ease the pain, some governments offer tax incentives. The US offers a $7,500 tax credit for the Volt and for the all-electric cars in Category 3. And because Chevy had a $5,000 price drop incentive in play for the Volt, and because we were willing to buy a 2012 demo model, we were able to get a decent price, so it pays to shop around. And powering a car with electricity is far less expensive than powering it with gasoline. Most EV owners talk about paying 1 to 4 cents per mile for their electric fuel depending on their electricity rate and their car, which is about 90% cheaper than gasoline. So the calculation for a Volt at today’s gasoline prices is that one will save over $7,000 on fuel costs over five years. And if gasoline costs double or worse?  After awhile, with the tax and fuel savings, these cars start to look cheaper than their gas-guzzling cousins.

And driving with electricity is far greener than using gasoline. There are zero tailpipe emissions. Yes, the power company producing the electricity pollutes, but the pollution from a large power plant is far less per kilowatt than an internal combustion engine. And if one powers an electric vehicle with renewable energy–either with their own renewables system or if they are lucky enough to live in an area with lots of hydro power–the pollution drops to near-zero for the EV, and takes an admittedly tiny bite out of the oil production chain of drilling, pumping, transporting to a refinery, refining, transporting to a delivery point, and finally burning in an internal combustion engine. Each of those points in the oil production chain has it deleterious effects on the quality of life on Earth. So any reduction in that chain has value.

If you wish to educate yourself on these topics, the Green Car Reports web site is highly recommended, and attending a meeting of your local electric vehicle club, if you are lucky enough to have one, is an outstanding opportunity. I was lucky enough to attend a meeting of Gordy’s PEVA and it was one of the jolliest meetings I’ve ever attended. These folks doing electric car conversions are having a lot of fun and some people at PEVA reported that their heath improved after they switched to an electric vehicle. Unfortunately, given that the US has become a theftocracy, now that the big car companies all have plug-in offerings, the US government no longer gives tax credits for converting cars from gasaholism to electricity, only for buying new ones.