Without a doubt, there is acceleration in lying, but also acceleration in the revelation of truth. Lies are the basis of many slaveries that exist on our planet at this time. Until they have been demolished, these slaveries will continue. As awareness increases on all levels, the lies will be demolished. But all of us can all accelerate that expansion of awareness. So on with the show:

The war drums are intensifying. The US Government has been having a seriously bad time these last few months keeping their lies secret: We found out that the IRS targets political opponents, the IRS tracks people’s activities in Facebook, EBay, etc and reads their e-mails without a warrant, the Justice Department spies on reporters who publish stories the Administration doesn’t like, the NSA spies on everyone worldwide and actively misleads Congress about all this, the US Attorney General likely lied to Congress, the military admitted that the “war on terror’ is permanent, worried about the lie that is the US Federal Reserve Note (aka the Dollar) twelve US states have measures in progress pushing for gold as legal tender, and today we find out that the DEA spies on people, tips off other law enforcement agencies about what they found, and then those agencies create fake evidence to show how they found out about this alleged wrongdoing. Government spokespeople regularly lie and are being found out within days. At first, the NSA claimed that their data collection had foiled 54 terrorist plots, but now NSA deputy director John C. Inglis testified “that at most one plot might have been disrupted by the bulk phone records collection alone. ‘There is an example that comes close…’ ” They kept saying “we only collect this, not that” but then it came out that they collect “word for word” all electronic communications.

It just seems to get worse almost every day. So what’s a country to do? War is a real possibility. Announce that no one will be home at most Middle East embassies because of a “credible terrorist threat.” If there is no attack, they can say all that spying was necessary and “a plot was foiled.” If there is an attack, they can decide who to blame and start a new war, distract people from everything that’s in this post, create a passel of new laws further restricting people’s freedom, further expand bloated intrusive government agencies, and so forth. Plus, we’re getting into the zone of the Wheeler Cycle of War and Political Change–which Wheeler researched in the 1930s–which projects war and/or major political change in 2014. You can see that the previous cycle low points on the chart pinpointed the starts of World Wars 1 and 2, the War in Viet Nam, and the huge political shifts in the USSR and China in 1989: 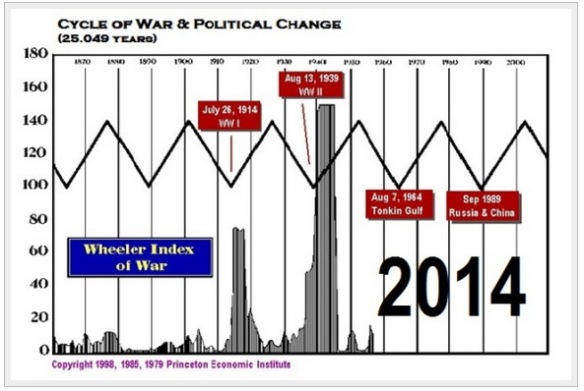 (Chart source: How Empires Collapse – A Orderly Path to Conclusion?)

I would not take that chart to mean that there won’t be any war till 2014. Cycles of this size are not always perfectly precise, I would say that we are in the cycle zone for the next war now.

Previous Thundering Heard posts weighed in on the world’s propensity for war: Beware the False Flag Attack, Pathetic Beating of War Drums, and Recommended: War Pigs – The Fall of a Global Empire.

For years we have been told by government and business “leaders” that if we make life great for the rich—those “dynamic people” who create businesses that create jobs—then life will be better for everyone. But what it actually does is–surprise, surprise–make things great for the rich. Every statistic about income disparity shows that disparity widening to extremes not seen since 1929, at the start of the Great Depression.

The richest two hundred people on the planet have $2.7 trillion in assets. That’s more than the assets of the poorest 3.5 billion people, whose assets total $2.2 trillion.

I am not arguing for some kind of communist redistribution of wealth. But I am arguing against a system where the tables are extraordinarily slanted in favor of the rich. And against a system where big business and political parties are in league to feather each other’s nests. They work so well together because they are the same! Modern political parties are big businesses fighting for market share. Just like the big corporations, they stand for the “principle” of increasing their own power and wealth, everything else is window dressing.

For example, US Federal Reserve Chairman Bernanke said this week that the Fed’s money printing has not benefited Wall St more than Main St. This one qualifies as a pathetic lie. Why? Because it’s so easy to disprove. But hey, ever since Ronald “The Great Communicator” Reagan set the trend for pathetic lying by saying things like, “With all the fuss people are making about homelessness, you’d think there were people actually living in the streets,” other public officials have felt more free to simply lie, lie, and lie some more.

Clearly, people who buy Armani and Porsches are doing great:

Everyone else, not so good:

80% Of US Adults Are Near Poverty, Rely On Welfare, Or Are Unemployed

But US politicians and stock market cheerleaders tell us that we are in a recovery and that incomes are rising. But here’s a chart that shows the truth about income in the US over the last 50 years: 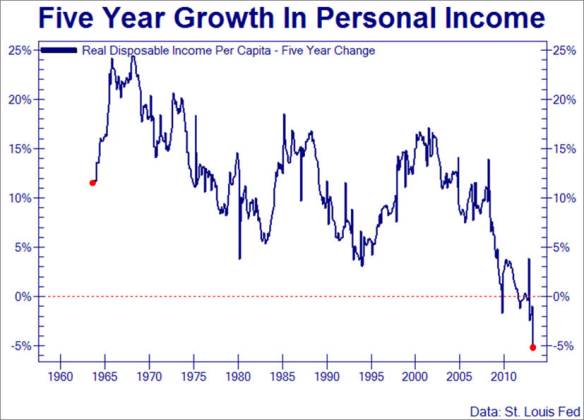 And guess what: That chart above includes the income of the rich. Which is a real problem because, as shown here, the top 0.1% of income earners in the US now take in 10.4% of all income earned. And their income has been skyrocketing along with Bernanke’s printing. But the bottom 90% of income earners have been losing ground. Their share of the national income pie is now back to where it was in…(drumroll please)…1929! That was the last time the very rich were getting absurdly richer at the expense of everyone else.

Let’s look at another tactic of the Federal Reserve: Everyone with savings of any kind hasn’t exactly been getting much in the way of interest on their savings for more than a decade. Bernanke and his predecessor, Alan Greenspan, have kept interest rates near zero for their big bank masters to “save” the banking system (they say it’s to save the economy, but then why does Wall St always get to hang right at the faucet to get and use the money first before it “trickles down” to everyone else?) for over a decade. Not that the banks actually needed saving—as a group, the big banks have only had one unprofitable quarter in the last several years. Which required huge bailouts. But I digress. These ultra-low interest rates have meant that the banks haven’t had to pay much interest at all on people’s deposits. So how much have people lost because of this? If interest rates had been at the same level as their average level from 1920 to 2000, depositors would have collected an additional $10.8 trillion in interest payments versus what they actually did collect. The calculations are here. So the banks (Wall St) get off the hook for interest payments, adding hugely to their profits, and everyone else, including Main St, loses out to the tune of $10.8 trillion.

So what about employment? Politicians keep saying they are creating lots of jobs. These statements are shot with lies and distortions as well. There was a “better than expected” monthly jobs report in June. But what really happened is that 360,000 part-time jobs were created and 240,000 full-time jobs were lost: 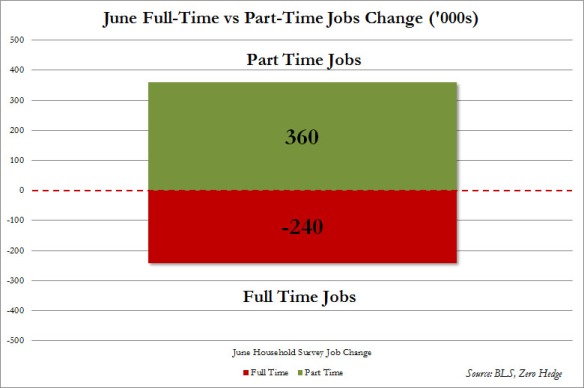 And what kind of jobs are these? Ten times more waiter and bartender jobs have been created in 2013 than manufacturing jobs: 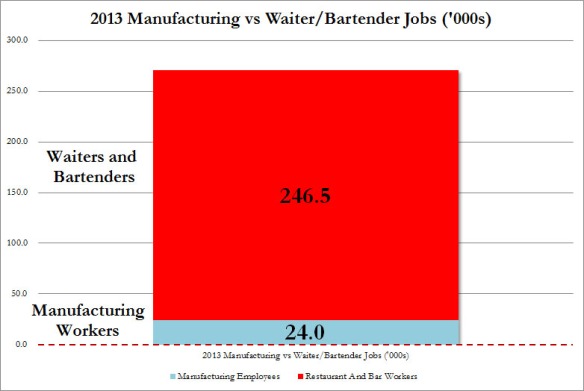 And different sets of government statistics disagree about just how many jobs are actually being created. If you look separately at the 50 US states, three (Texas, NY, and North Dakota) have more total jobs that they did at the end of 2007. The other 47 states have fewer jobs. Added up, those 47 states have 3.1 million fewer jobs than they did at the end of 2007, as shown here: 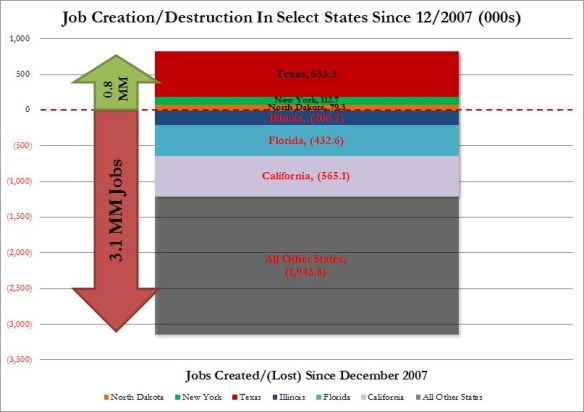 But we’ve been told that the unemployment rate has dropped from over 10% to 7.4%, isn’t that correct? That statistic has improved right in line with an alleged drop in the total size of the labor pool despite population increase. In other words, the government claims that fewer and fewer people are part of the overall labor pool, meaning that the percent of them who are working automatically goes up. It’s a very convenient way to make sure the rate of unemployment drops since it can be done with statistics alone. Here’s a chart of the percent of adults who are participating in the labor force: 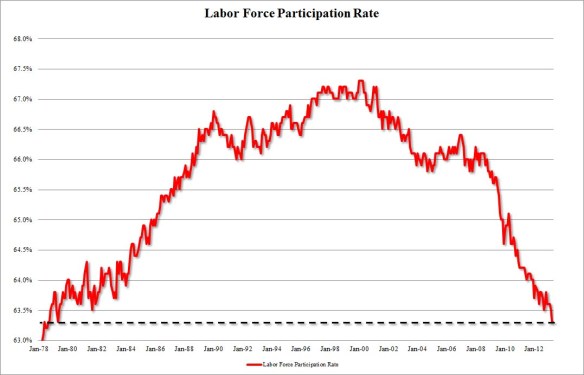 This rate is now back to where it was in 1979. So the unemployment rate has improved only because lots of disgruntled job seekers have entirely given up on looking for work at all? Or is this simply a statistical ruse? The fact is, more than 90 million working-age Americans don’t have a job.

And you know that US lie where the people think the US is No.1 in everything that’s important? Well when it comes to median wealth, the US is 27th in the world. Here’s the chart: 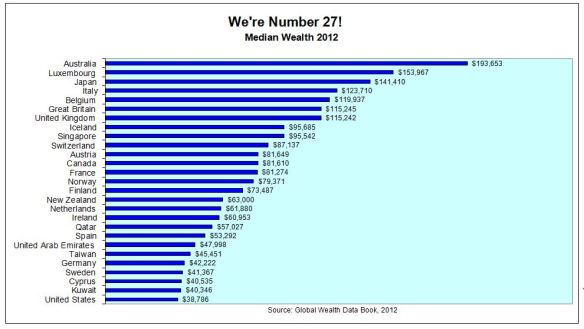 Things have become so bad in the US that a member of the US Federal Reserve Board says, and I quote, that the “Mexican Government is better run than the US Government.”

Folks, there are so many lies out there that this post could probably be perpetual. But for today, the persecution rests. In the next post on the topic of lies, we’ll pick on Europe. Surely, things must be better in Europe. Ha!