So you can be prepared, if you wish, here are some cycles due in 2015. One of them is gigantically important to both the political and financial worlds, so I hope my exposition is clear.

The first cycle is very easy to understand: something economically important really hits the fan every seven years. Going in reverse from here, seven years at a time:

The article at this link talks more about this cycle, including the note that the years in this seven-year cycle that coincided with an Autumn solar eclipse (1931 and 1987) had particularly strong events; and 2015 does have two solar eclipses. Again, from the article at the link:

Some great forecasters think that March is a strong candidate for significant financial turbulence in 2015, and there is a total solar eclipse on March 20. And there is a partial solar eclipse on September 13, a better calendar correspondence with the events referenced in the quote above. So maybe we’ll get two strong events this year.

For those of you who believe what you read in the US media, perhaps you are wondering how we could get major financial problems when things are allegedly so “awesome.” Well, sorry to tell you, but even Goldman “doing God’s work” Sachs just admitted that the world economy has gone into contraction:

It’s Official: Global Economy Back In Contraction For First Time Since 2012 According To Goldman

(As a side note, Al Jazeera did a great video on true nature of Goldman Sachs. The link is here, but, if you are in the USA, the censors won’t allow you to view the video in the “Land of the Free” US, it’s only playable outside the US. A lot of that type of thing is going on these days. It’s a small part of what has dropped the US down to 49th globally in press freedom; see World Press Freedom Index Plunges – USA Now Ranked #49 Globally.)

If this seven-year cycle repeats in 2015, then I think we can easily predict what the authorities will do since it seems to be the only thing they know how to do when there’s trouble: print more money by creating more debt! But as explained in The deflationary wave intensifies, this strategy has become counter-productive and is locking the world economy in a deadly stranglehold.

Some realize all this and some do not. But this brings us to our second cycle: Martin Armstrong’s Sovereign Debt Big Bang. Here is a slide of Armstrong’s forecasts from a conference in early 1998:

These major forecasts all came true. The only one left to go (2015.75 = September 30, 2015) is the Sovereign Debt Big Bang. What it says in that the tide will monumentally shift away from confidence in government bonds starting on September 30, 2015. Currently, confidence in government bonds is so high that people are buying them even with negative interest rates. The easiest way to understand interest rates is that they are the rental charge for lending someone money. So you rent someone $100 and you hope to get back maybe $103, the original $100 plus $3 of rent. But people are now buying government bonds even though they get back less money than what they lent to some government in the first place. They are paying governments to lend them money!

16% Of Global Government Bonds Now Have A Negative Yield: Here Is Who’s Buying It

That was a few weeks back, at which point JP Morgan calculated that $3.6 Trillion worth of government bonds were paying negative interest rates. Some of the countries involved were Germany, Switzerland, Japan, Netherlands, Sweden, and Denmark. In Denmark, because interest rates went negative, some adjustable rate mortgages are now paying interest to the people who took out the mortgage!

In Denmark You Are Now Paid To Take Out A Mortgage

Now you might say: Why would anyone buy a government bond with a negative interest rate?!?! When I first said we should expect negative interest rates in More shackles readied for deployment, I did get a few e-mails politely suggesting that I might want to get checked for dementia. Here’s what was said:

This is crazy. Most people alive today think governments never default on their debt.  But that’s just plain wrong. Here is a chart showing country debt defaults going back to 1800. And this chart only shows those countries that have defaulted at least four times, the rest are not shown. Note that the list includes supposed stalwarts like Germany: 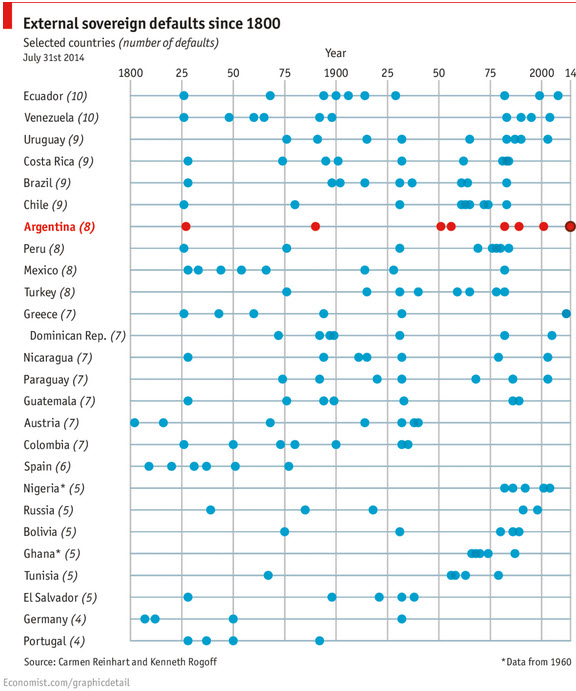 (Chart source, from The Economist.)

What Armstrong is saying–and he has been saying it since the 1990’s and has strong mathematical/historical models backing up his forecast–is that, near the end of this year, the world at large is finally going to wake up and understand the insanity of all this government borrowing. Not all at once, but relentlessly. They will see that most if not all countries are not going to pay back what they borrowed. They can’t. They don’t have the money. Greece is the first country to forthrightly admit it. One of the pompous Eurocrats threatened Greece last week, saying “If you don’t do what we say, Greece will go bankrupt.”  To which the Greek Finance Minister Yanis Varoufakis replied, “Greece is already bankrupt.”  (Straight truth! From a politician! Finally! Maybe that will become a trend!)

And somehow, the financial system has come to accept government bonds as collateral for other loans and bets. The $1 Quadrillion (that’s 1,000 Trillions) world derivatives casino market floats on a thin veneer of government bonds as “collateral” for these bets. Before the US defaulted on its debts in 1971 when Nixon said they were no longer payable in currency backed by gold, as previously promised, but now were backed by promises alone, collateral meant something real. For example, when you have a mortgage, your house is the collateral. A car is the collateral for an auto loan. But now in the financial world, someone’s promise to pay back a loan that they can never repay counts as collateral for even more loans. This is insane. Starting later in the year, a lot more people will start to understand that. That’s the nature of this Big Bang cycle. And there will be major repercussions. We talked about the demise of banks, pensions, and insurance. The derivatives collapse will take down all the brokerages and investment banks. So where will people get money?

Governments love to hide the truth about their historical defaults on their debt. Thus everyone is taught that the “cause of the Great Depression” of the 1930’s was the 1929 stock market crash. Total BS. The stock market crash wiped out stock speculators. That wasn’t a truly big deal. What took down thousands of banks were defaults on government bonds they and their customers were holding. Let’s look at that government bond default chart again. This time there is a red box around the worldwide wave of country debt defaults in the early 1930’s that wiped out thousands of banks and millions of savers: 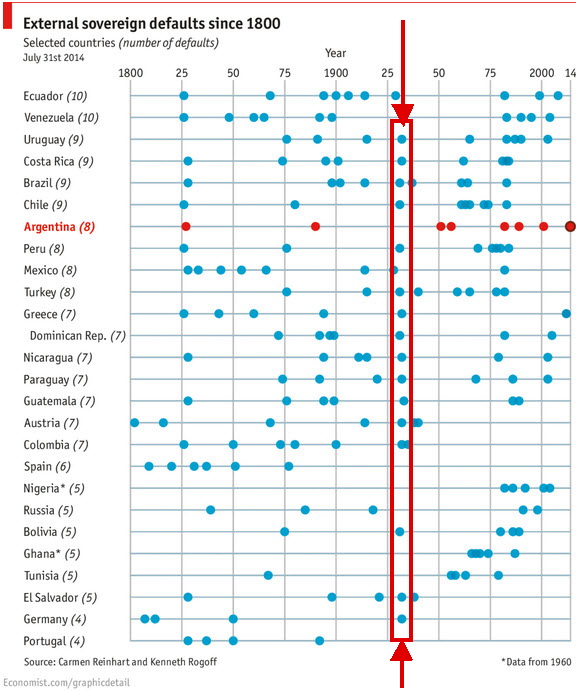 Get it? That’s what’s coming up again, only this time it will be worse. Way worse. There’s been far more borrowing, far more leverage, and all of it is floating on paper and electronic currencies and promises. The link to reality–gold–was removed in 1971. 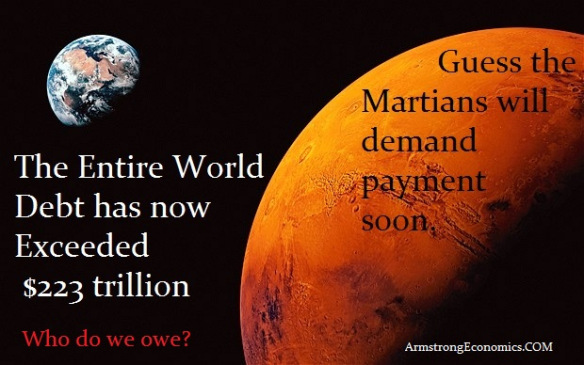 Now some people say all this unpayable debt can be wiped off the books in a debt jubilee, like they used to do in Old Testament times. Well that’s true. It can. The problem is that anyone who put money in a bank account needs to realize that they have loaned that money to the bank. It’s a debt of the bank, they owe you money. And your deposit is backed by government debt, not by actual cash. So, if there were a debt jubilee, no one would have any money in their bank account anymore. Same for businesses, so no business would be able to write a paycheck to anyone. ATM’s would not be able to dispense any cash. Credit cards would no longer work. All of the money in the world is someone’s debt to someone else. So a debt jubilee would mean there was no money.

So now, do you want a debt jubilee? Of course not. But we are going to get one anyway. Not on purpose. By accident. Starting in a big way later this year.

Why can anyone be confident that this is true? Well first, go back and look at the rest of the predictions on Armstrong’s slide from 1998. Second, it’s already starting to happen. Greece, Argentina, Puerto Rico–the dominoes are starting to fall. Japan is a financial basket case, there is no way they can repay their debts, and they have the second largest pile of government debt on the planet. The whole world has gone wild for debt!

Which brings us to a third “cycle of interest’ for 2015. What else floats on a sea of debt? Real estate prices! This cycle was described before here:

As examples, due to his real estate cycle work for the US, he was telling clients–in the 1990’s to give them ample time to act–to be out of all US real estate investments by February, 2007; that real estate prices would then fall from 2007 into 2012, then rise into 2015 in a snapback rally that would sucker a lot of people back into real estate, and then fall again through 2033.

Well here we are in the snapback real estate rally into 2015. So many have forgotten the 9 million US foreclosures and the 7 million US households that are still “under water” on their mortgages. All the signs of a bubble are back, though now some are already starting to dissipate as real estate prices in some of the bubbliest areas roll over:

The bubble is stronger than ever in countries like Canada, Australia, and the UK. Unless people request it by sending me e-mails saying they want it, I’m not going to do a detailed post on real estate. I doubt it will change anyone’s mind, so it probably isn’t worth it. But when the biggest debt bubble the world–and perhaps the galaxy–has ever known pops, and governments are falling left and right, real estate prices will be hammered. And those falling governments will be desperately raising property taxes to try to stay afloat.

And anyone who agrees with people who say that “debt doesn’t matter,” like Dick Cheney from the right or Paul Krugman from the left, is going to get quite an education over the next few years. Actually, we all will. Which is good, in my view. Humanity badly needs to understand which actions have real value and which do not.