Darth Summers made a speech on Nov. 8 to a gathering of economists at the IMF. My guess is that they had Darth (OK, Larry) give the speech because he doesn’t currently hold a position with any institution that could then be blamed and hated for the policy promoted in the speech. (Here’s the speech, though I don’t recommend it.) However, I think it wise to consider the speech an official announcement of the latest wicked that this way comes.

The policy is that savers will soon be hit with negative interest rates. Now Larry didn’t say this directly, he slithered around it and offered the “clear justification” for it. But in reviews of what his admirers called a “brilliant” speech, the admirers were quite clear in their understanding: negative interest rates…in cashless society! That was the full policy implication.

So people would have to pay the bank interest on their own savings. So if the negative interest rate were -3%, if you had $100 in your account, you’d have to pay the bank $3 in interest. And just in case anyone had any ideas of getting their savings out of the banks, well, get their savings out into what? In a cashless society, your money would simply be an electronic entry in an account. Getting your money “out” would mean spending it. Which is the problem that Summers and his fiends say they are trying to solve: how to get people to spend, spend, spend their money. They say there isn’t enough “aggregate demand.” Don’t have any money? Then borrow some, it’s really cheap. But in any case, spend!

Of course, this would also mean that when the government borrows money, the interest rate would be negative for them as well. The more money they borrowed, the more money they would collect as the lenders paid them interest!

Now it goes without saying, though I’ll say it anyway, that if you went to borrow some money, this negative interest rate thing would not apply to you. You’d still have to pay interest on your loan. This negative thing would only be for them, that is, the banks and governments. Oh, and large corporations, how could I leave them out. But not you or me. Whether borrower or lender be, either way, we’d have to pay. Know what the average interest rate consumers are paying on their $846 billion in outstanding credit card debt? 13%. Do you think the banks are going to give up that bonanza?

Now any rational person might think: They’ll never do it! Negative interest rates would wreck every pension fund in the world. And so they would: pension funds are all dependent on collecting interest to meet their future obligations. But too bad. If people can’t collect pensions, then they’ll have to stay in the workforce. And with all that competition for jobs, companies can pay lower and lower and lower wages. Why do you think they outsource work across the world! Do you think this paragraph goes to far? Then consider this: Collecting Donations For Wal-Mart Employees That Cannot Afford Thanksgiving Dinner?

At the Wal-mart on Atlantic Boulevard in Canton, Ohio employees are being asked to donate food items so that other employees that cannot afford to buy Thanksgiving dinner will be able to enjoy one too.

So, they think that taxing people’s savings, both in their bank accounts and in their pensions, will get the economy on a sound footing again. Because that’s what these policies are, they are taxes, part paid to government and part to the banks. So why don’t they just say that? Two reasons: first, people tend to get angry about new taxes and they tend to vote out whoever levies new taxes; and, the group at the Summers speech are economists, and all economists know that raising taxes squelches economic growth. So they can’t call it a tax or everyone would point out that the policy is anti-growth. Which it is. But logic left the room of mainstream economics years ago. They maintain their lofty positions as Machiavelli advised: they serve their governing masters well. So these policies have nothing to do with logic. The governing masters keeping their power, that’s what it’s all about. And these economists know who spreads the caviar on their toast points. These policies are designed only to preserve the powermonger status quo.

Plus, they are fairly sure it will be a long time before the public catches on. They can just repeat over and over that this is for jobs and growth, and the majority, desperate for good news, will believe it. And in this ploy, the economists are likely correct. They have been engaged in multi-$trillion Quantitative Easing (money printing) for years and, according to a Reuters poll, three quarters of Americans don’t even know what QE is. And people weren’t asked to explain it, they were given a multiple choice question, so 20% could have answered correctly just by random choice!

Twelve percent of respondents thought QE was a computer-assisted program that the Fed uses to manipulate the dollar. Another 11 percent thought it was part of the Dodd-Frank Wall Street reform legislation enacted following the crisis.

So the economists of The Powers That Be figure they can obfuscate their way through just about anything.

So let’s get this straight. These thieves want to steal people’s savings and pensions. So that people must remain as wage slaves till they drop, filling a growing labor pool being paid wages that are declining in all of the developed economies. And they’ll be great fodder for the upcoming war economy, grateful for the opportunity to build weapons that kill in better and better ways. While the rich and powerful get more caviar, as shown on the chart below. The dark brown line is the average stock price of retail for the rich: Tiffany, Coach, and LVMH. Those stocks have risen 500% since their 2009 lows and are over 30% above their former peak in 2007. The blue line is Macy’s, Kohl’s, and JC Penney, where the disappearing middle class shops. Those stocks are up 100% since 2009 and are still 30% below their former peak in 2007: 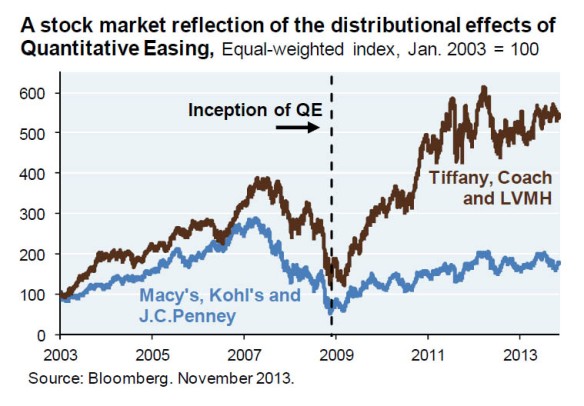 That is a great demonstration of who is receiving all that newly printed money and who is not. These folks want more slaves. And the ability to bomb into chaos any region that does not offer up its people into the slave pool.