After a brief mention of other natural changes, I would like to move on and treat a difficult trend that is at the intersection of human activity and earth changes, followed by discussions of the effects of acceleration on people.

There are other observable changes in the natural world such as:

–SINKHOLES: There has been a rapid increase in reports of sinkholes. No one keeps statistics on these, at least not yet. But ask yourself: twenty years ago, how often did you hear about sinkholes? Now, it’s tough to go a week or two without a report:

In just one month, more than 40 huge sinkholes open up all over Harrisburg, Pennsylvania’s capital, but the city is too broke to fix them

Amazing pics of a hole that opened up the earth

Sinkholes are becoming a worrying problem in China. In 2007, there were 54 sinkhole collapses, and by 2009, that number was all the way up to 129. According to one estimate, between July 21st and August 12th 2012, 99 sinkhole collapses occurred just in Beijing.

–ASTEROIDS, fireballs in the sky: The world of youtube has been showing what appears to be quite an increase in meteorites/fireballs over the last several years. Within the last three months, however, these have gone mainstream media:

Then there was the meteor that hit Russia on Feb 14, shown all over the web, including here and here; and,

2012 DA14, which passed inside the orbit of geosynchronous communication satellites, missing the planet by 17,000 miles on Feb 15.

–COMETS: Of the many comets that pass the earth each year–most of them not visible to the naked eye–there is great interest among comet-watchers in one scheduled for this year, called 2012 S1 (ISON), which has the potential to become exceedingly bright and which some comet watchers claim will have important influences on Earth.

We will delay further discussion of this asteroid and comet phenomenon for the upcoming section of this series that deals with Predictions, though it seems worthwhile to note that Russia and all of us were very lucky: that meteorite in Russia exploded near Chelyabinsk where large amounts of nuclear waste and dangerous industrial chemical wastes are stored. We are all fortunate that the meteorite did not strike these directly, which leads in to the next topic.

Virtually all nuclear power plants are situated adjacent to a body of water that is typically used to cool the plant. With the major trend increases in storms, floods, tsunamis, and earthquakes documented in Part 1 and Part 2, combined with decades of “profits above all else” at many of the corporations running these nuke plants, to say that this situation is dangerous requires a new category well beyond understatement. 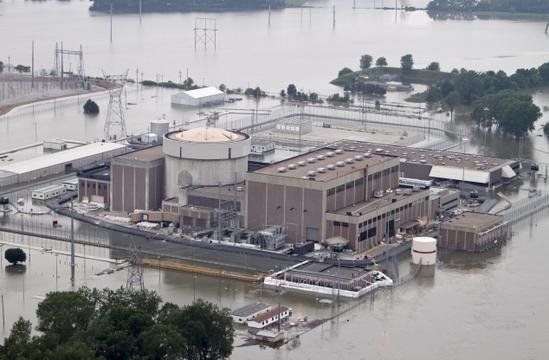 As many as 12 of Britain’s 19 civil nuclear sites are at risk of flooding and coastal erosion because of climate change, according to an unpublished government analysis obtained by the Guardian.

Nine of the sites have been assessed by the Department for Environment, Food and Rural Affairs (Defra) as being vulnerable now, while others are in danger from rising sea levels and storms in the future.

And of course we all know more than we ever wanted to know about what happens when a tsunami hits a nuke plant. If anyone thinks the Fukushima problem is over, they have been ignoring the news flow on that topic. Even in the unlikely event that there are no additional difficulties from the cores and spent fuel at Fukushima, the damage from the original event is not over:

Tokyo almost as irradiated as Fukushima

Meet Mike, The Most Radioactive Fish Ever From Fukushima

Study: Contaminated water from Fukushima reactors could double radioactivity levels of US coastal waters in 5 years — “We were surprised at how quickly the tracer spread” (PHOTO & VIDEO)

While many consider Fukushima to be a one-off event, it seems to me that logic dictates that the acceleration in earth changes plus the location of these plants next to water means that we have an extremely unfortunate emerging trend on our hands.

In Part 5, I’ll begin treatment of the human side of acceleration and the Transition.