Today we’ll review one of the single best pieces of economic / political / social analysis I’ve been lucky enough to see. Read this post and you’ll have an extremely important input for how the world will proceed over the next eleven years. How can I make such a statement? Because this analysis landed on my screen in December, 2007, and it covered the time period from 1995 through 2024, and it has been working extremely well. I promised more about cycles. This is from the world of cycles.

Understand this analysis and you will understand what Ben Bernanke of the US Federal Reserve has publicly admitted has been befuddling him and his colleagues.

At the time of publication at the end of 2007, this analysis said that we had reached a major turning point: That while the period from 1995 through 2007 had been characterized by optimism (think of all the “new era” talk), manias (think bubbles in stocks and real estate), high confidence, free enterprise, free trade, globalization, unfettered capitalism, and so forth–all of which had clearly been at the forefront during that period–that the period from 2008 through 2024 would be characterized by caution, fear, contraction, pessimism, restrictions on freedom, economies planned by the state, trade barriers, low confidence, and so forth. Here is part of what was presented:

To put it mildly, an awful lot of people would have benefited if they had known about this huge switch that did occur, just as predicted, in January 2008. It really was as if, at the end of 2007, someone threw a big switch and changed things dramatically. Central bankers and politicians around the world are still scratching their collective balding heads about why all of the things they used to do in the past, things that would work to stimulate economies, are barely working today. At first they used their old tried-and-true methods–lowering interest rates, feigning confidence, stuffing cash into the banks, spending money on stimulus plans–and they got an anemic recovery at best. So they pulled out the really big guns. “Unconventional” methods, as they call them. Also known collectively as printing money. Lots of it. Enough since 2009 that they have basically tried to add the equivalent of one year of the US economy to the global economy.

What has it got them? Well, since the printed money went into buying assets rather than creating jobs, the rich and their vendors–Sotheby’s, Porsche, Armani, et al–have done very well. Everyone else, not so well. The huge divide between rich and poor is widening at an accelerating pace. Historically, that has always been a dangerous setup. You can only push people so far before they push back. Sometimes fiercely. Overall, what it got them was continuing recession and debt crises in Europe, a US economy with paltry growth at best, and China joined the club of getting themselves over-indebted to keep their economy growing, but now that excess of debt is coming back to bite them and their economy is rapidly losing steam. Japan remains in near-continuous recession no matter what they do.

Since the analysis above has been working remarkably well for 18 years, it makes a whole lot of sense to figure that it will keep working for the next eleven years. That was the claim for this cycle, that it would have two phases, one from 1995 through 2007, and the second, radically different in tone, from 2008 through 2024.

What could be the cause, the source, of such an influential cycle, one that seems to have changed the energetic tone for the majority of people, from excessive optimism from 1995–2007, to caution from 2008–2024? Let’s show more about what the top of that table looked like when presented in December 2007, right at the point of the big switch: 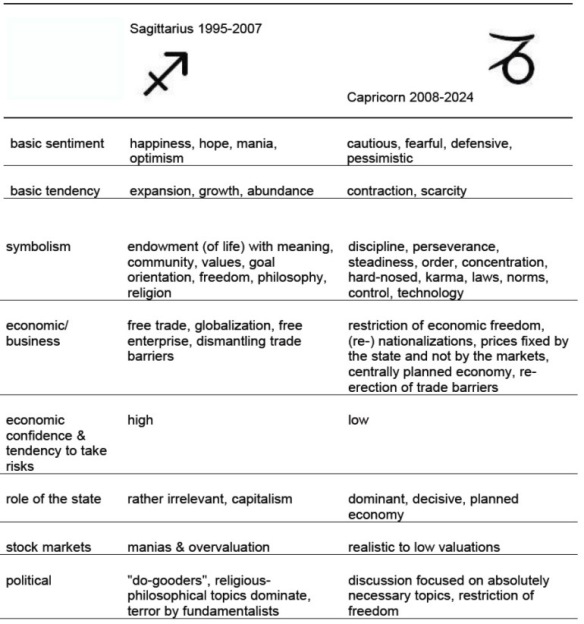 The table was astrological in nature.  It showed what was about to happen as Pluto moved  from Sagittarius into Capricorn.

This outstanding piece of analysis was put forth by Manfred Zimmel through his web site  in his Forecast Issue for the year 2008. At the web site, you can sign up for his free newsletter or paid subscription service. The information above was given to his paid subscribers only.

Now I know that some readers here have a low opinion of astrology. I would say two things about that: First, I agree that popular astrology as shown in daily newspapers and glossy magazines is worse than useless. Second, as with most complex fields of endeavor, there is a small group of practitioners doing excellent work and a much larger group of practitioners who do not. But excluding astrology from one’s view of the world precludes access to information like the above, which can be exceptionally useful in guiding real world decisions. Also, it can provide an outstanding “truth filter” for claims about the world. For example, the article at this link contains five predictions Bernanke made in 2008 that, armed with the information above, one could see at the time that these were more than likely to be wrong. They turned out to be, in fact, entirely wrong:

1/10/08 — The Federal Reserve is not currently forecasting a recession. WRONG

2/27/08 — I expect there will be some failures [among smaller regional banks]… Among the largest banks, the capital ratios remain good and I don’t anticipate any serious problems of that sort among the large, internationally active banks that make up a very substantial part of our banking system. WRONG

4/2/08 — In separate comments, Mr. Bernanke went further than he had in the past, suggesting that the Fed would remain aggressive and vigilant to prevent a repetition of a collapse like that of Bear Stearns, though he said he saw no such problems on the horizon. WRONG

6/10/08 — The risk that the economy has entered a substantial downturn appears to have diminished over the past month or so. WRONG

7/16/08 — [Fannie Mae and Freddie Mac are] adequately capitalized. They are in no danger of failing… [However,] the weakness in market confidence is having real effects as their stock prices fall, and it’s difficult for them to raise capital. WRONG, they needed bailouts to the tune of $160 billion.

The point here is that automatically excluding information because of its source can put a person at a distinct disadvantage in understanding how the world works and where it is heading. Anyone who has read more than a couple of my posts knows that I regularly give the US Federal Reserve a well-deserved lambasting for its lies, its attempts to get over-indebted people to borrow and spend more, and its only real goal: protecting the stranglehold that the large banks have on our society. But I used one of their reports in 2005 to decide when to sell out of real estate. They published a great research paper in 2005 that analyzed the history of maybe 30 real estate booms and busts from many countries. They said that real estate bubbles popped in the following manner: once sales volume peaked, price peaked, on average, six months later. US sales volume peaked in October 2005, and the US price peak was in June 2006, so their estimate was quite good. I took their research seriously and sold in Feb 2006. They, however, did not take their own research very seriously, at least in their public statements. Here are some quotes from Bernanke in 2007 (I won’t bother putting the WRONG label after each.):

INTERVIEWER: Tell me, what is the worst-case scenario? We have so many economists coming on our air saying ‘Oh, this is a bubble, and it’s going to burst, and this is going to be a real issue for the economy.’ Some say it could even cause a recession at some point. What is the worst-case scenario if in fact we were to see prices come down substantially across the country?

BERNANKE: Well, I guess I don’t buy your premise. It’s a pretty unlikely possibility. We’ve never had a decline in house prices on a nationwide basis. So, what I think is more likely is that house prices will slow, maybe stabilize, might slow consumption spending a bit. I don’t think it’s gonna drive the economy too far from its full employment path, though.

10/20/05: BERNANKE: House prices have risen by nearly 25 percent over the past two years. Although speculative activity has increased in some areas, at a national level these price increases largely reflect strong economic fundamentals. (Ha!)

So the next time you hear rosy predictions about the great recovery that is turning out to be perennially “just around the corner,” whether those predictions are from someone who is mistaken or someone with malevolent intent, now you can understand that what these forecasters are up against is this: for an economy based on debt to grow, they need to get people to borrow more money. And until 2024, people are under the influence of Pluto in Capricorn, and most of them don’t really want to take on more debt. Quite the contrary, a lot of them have replaced the notion of “how much debt can I qualify for” with a wish to have less debt. Many have now seen the slavery of debt and they didn’t like what they saw.

Perhaps after 2024 the economists will be able to stimulate the majority’s “animal spirits” again. The question is: can this financial system, which depends on the constant growth of debt, survive through 2024 with people not wanting more and more debt?  I decided quite some time ago that the answer is no and persistently take those pleasant actions that ready a person for financial system collapse.  I take the influence of this Pluto “big switch” as a small but important part of the energetic change bringing us the long-awaited Transition.

Thanks to Manfred Zimmel for permission to reprint this excellent piece of research.

2 thoughts on “A Forecast for the Next Eleven Years”