If governments won’t go back on a gold standard, individuals can go back on the gold standard all by themselves
–Peter Schiff, in the documentary End of the Road: How Money Became Worthless

Want to see what is said to be 10,000 Chinese folks lined up outside of a gold retailer in China to buy physical gold on June 11? 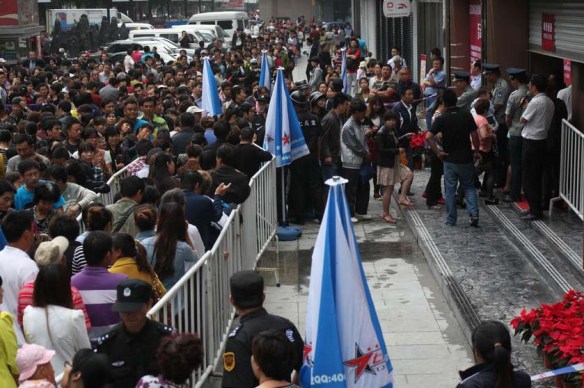 More photos are here or here.

And there is “unprecedented” demand for US gold and silver bullion coins:

Demand for U.S. gold and silver bullion coins is still at “unprecedented” high levels almost two months after an historic sell-off in gold released years of pent-up demand from retail investors, the head of the U.S. Mint said on Wednesday.

“Demand right now is unprecedented. We are buying all the coin (blanks) they can make,” Richard Peterson, acting director of the U.S. Mint, said in an interview referring to the Mint’s suppliers.

India imports gold to meet internal demand, and there is so much demand for physical that it is driving up the trade deficit, spurring the government to make laws trying to stop the people in India from buying so much gold:

And there is a buying mania for physical in the Middle East, where the gold market is centered in Dubai:

European banks are still having trouble delivering gold stored in those banks by their by clients, and for those who want gold from refineries, they have to wait five to six weeks for delivery:

Some in the mainstream media have claimed the buying is over, but the data shows otherwise:

Point Out The “Slump” In Chinese Gold Imports On This Chart

And the ultra-rich are said to be buying:

Deutsche Bank AG said it started gold storage facilities that can keep as much as 200 metric tons at the Singapore FreePort.

“We are seeing considerable interest on the part of our ultra high net-worth clients in this asset class,” Mark Smallwood, head of wealth planning at the bank’s asset & wealth management unit in the Asia-Pacific region, said today in an e-mailed release.

Now if you think it’s odd that there is a buying frenzy and the price stays low, congratulations, you have not been compromised despite years of hearing lies from the mainstream media.  Just this week, whistleblowers have emerged to reveal that yet another of the world’s major financial markets is manipulated, this time the currency markets, you know, the trading of dollars for yen for pounds for euros and so forth. Those trades add up to $4 trillion to $5 trillion per day. Certainly worth manipulating if one is a criminal and has the means. Well, manipulation is precisely what is going on:

According to Bloomberg, “employees have been front-running client orders and rigging WM/Reuters rates by pushing through trades before and during the 60-second windows when the benchmarks are set, said the current and former traders, who requested anonymity because the practice is controversial. Dealers colluded with counterparts to boost chances of moving the rates, said two of the people, who worked in the industry for a total of more than 20 years.”

As I’ve said before, all of the large markets are rigged. Now that the truth is emerging on this and so many other fronts, how long will they be able to keep the rigging going?

The gold price in particular is still being set not by demand for real gold, but in the paper gold market, the futures market. But there’s a growing problem with that. Just like at the European banks, the physical gold that provides very partial backing for the futures trades is being withdrawn from the vaults. People want physical, not paper! When that chart shown just below goes to zero, and it will, there won’t be any more gold futures trades in the US and the gold price will be free to trade by actual supply and demand for physical gold for the first time in over a hundred years:

Comex Gold Inventories Collapse By Largest Amount Ever On Record 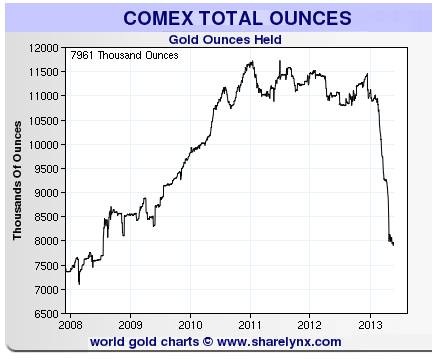 So, when will the price recover to its former highs and beyond? One of the few advisers who recommended selling gold at right at $1,900 (not the ones who don’t have a clue about gold who repeatedly said to sell when the price was $700 and $800 and $900 all the way up to $1,900, like Nouriel Roubini), now says the downward price move is over, or just about over, and they are buying back in for the long term. From Jim Sinclair’s site:

Charles Nenner, one of the few that called the $1900 high for a SERIOUS reaction without any agenda except to excel in market timing.

So far, Silver reached our downside price target, while Gold missed it twice by 40 Dollars.

As long as Gold does not close above 1530, we think that we can see one more test of the lows – but time is running out.

If we see one more sell off, the risk is limited, and we can just sit it out, while being positioned for the upside.

I’ve got twenty articles ready to go as sources for my upcoming post on why you might not want to use the banking system for anything but transaction processing. And that will be followed by a similar post about brokerage accounts. As Peter Schiff said a the top of this post, people don’t have to wait for governments to be on the gold standard, they can do it for themselves.