We likely all received a dose of it today. How can I be sure? Because to date, every study in which they test people and animals for glyphosate has come up 100% positive. Not just high rates. Every person. Every animal:

According to the German journal Ithaka, every single urine sample collected from city dwellers around Berlin tested positive for glyphosate, with values ranging from 0.5 to 2 nanograms per milliliter (ng/ml) – that’s between five and 20 times the permissible upper limit for glyphosate in German drinking water, which is set at 0.1 ng/ml.

According to this latest indictment of the Monsanto-owned chemical, glyphosate, the primary active ingredient in Roundup herbicide, was identified in 100 percent of urine samples collected from dairy cows all across Denmark…

According to this study published in the Journal of Environmental and Analytical Toxicology, glyphosate levels in animals raised in conventional industrial husbandry were 20 times higher than those in GMO-free countries. Also:

So while it is clearly advantageous for a person to eat organic food, preferably in a GMO-free country, even that doesn’t preclude one’s having some glyphosate in one’s system. How could that be?

A new study from the U.S. Geological Survey, accepted for publication online ahead of print in the journal Enviromental Toxicology and Chemistry, … reveals that Roundup herbicide (aka glyphosate) and its still-toxic degradation byproduct AMPA were found in over 75% of the air and rain samples tested…

OK, this stuff is everywhere (more on that below). But so what. Monsanto says it’s harmless to people and animals. For anyone who might believe that, please carefully check these charts from this report which show a very high correlation between the rise in the tonnage of glyphosate used in the US with the rises in autism, death from Alzheimer’s, and death from senile dementia: 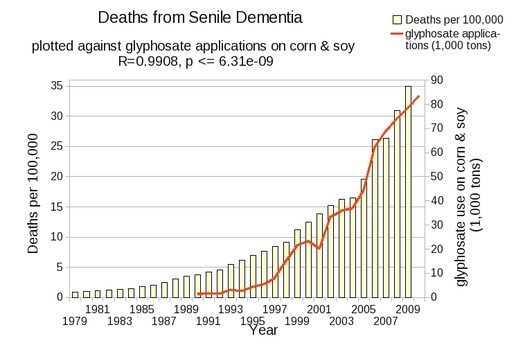 I am well aware that correlation does not prove causation, but these charts are more than a little convincing, and study after study is emerging linking Roundup with a host of diseases. It’s easy to find them on the web. Here are two:

Roundup, An Herbicide, Could Be Linked To Parkinson’s, Cancer And Other Health Issues, Study Shows

Celiac disease, gluten intolerance and irritable bowel syndrome are on the rise worldwide, and that rise has taken place in parallel with the increased use of glyphosate (Roundup) herbicide, shows a new US peer-reviewed paper from Dr. Anthony Samsel and Dr. Stephanie Seneff. The review has been published in the Journal of Interdisciplinary Toxicology…

“All of the known biological effects of glyphosate – cytochrome P450 inhibition, disruption of synthesis of aromatic amino acids, chelation of transition metals, and antibacterial action – contribute to the pathology of celiac disease,” Samsel and Seneff’s paper states.

How is this stuff becoming so prevalent in our environment? The primary cause is GMO’s, 85% of which are designed to tolerate wholesale spraying with Roundup, which kills surrounding weeds without killing the corn, soy, canola, cotton, etc. (Of course, Roundup-resistant superweeds are emerging, but let’s not go there today.)  But this second cause is a perfect indication of what a death zone industrial agriculture has become. This new “advance” in industrial agriculture, especially favored so far in Europe, distributes massive amounts of glyphosate:

Glyphosate probably entered human populations over the past 10 years through its increasing presence in daily foods such as meat and dairy products, vegetable and fruit produce and grains products. Glyphosate-laced genetically modified Roundup soya which enters the animal food chain, is only one of the risk factors.

Even more dangerous now is the increasing use of herbicides in the EU over the past several years for the desiccation of entire stocks of harvestable crop.

‘Spraying crops to death,’ as desiccation should be more aptly called, means that herbicides are being sprayed directly on the crops shortly before they are to be harvested to facilitate the harvest by uniformly killing off all living plants (including the crops) on the field.

If crops cannot fully mature due to excessive rain, as was the case in the summer of 2011, herbicides are used to bring the crops to maturity by means of a ‘death-spray.’ The method facilitates the drying of the crops as well as removing all weeds for the next sowing period, and has become common for the harvest of potatoes, cereals, canola and pulses.

For potatoes, spraying herbicides on the field immediately before harvest (2.5 l / ha), hardens the skin and reduces its susceptibility to late blight and germination, which improved the potatoes shelf life. Active compounds of the herbicide directly enter the potato through the leaves; however, decomposition of the poison takes place in the body of the consumer.

They do this so that the food looks perfect at the supermarket and has longer shelf-life to fool you into a dream that what you are buying is fresh, pristine, nutritious. In fact, glyphosate has been shown to be intact in foods a year after they are sprayed. This is destroying people’s brains. It’s tempting to say, “No wonder lots of Americans, when given the choice by state referendum to require that foods containing GMO’s be labeled as such, vote against such measures since their brains are already impaired by all the glyphosate in their system” but that wouldn’t do justice to their gullibility when they see something on TV–such as an ad proclaiming that GMO’s are safe–and automatically believe it: “Hey man, I saw it on TV.” These people should have this logo:

stamped on their forehead so that the rest of us could be forewarned when dealing with them. OK, OK, I’ll stop being surly and get back to the topic.

Some countries are catching on. Netherlands, Brazil, Sri Lanka, and El Salvador have either banned the use of glyphosate or are putting the finishing touches on their rulings. In the US, it gets worse and worse: it looks like the USDA is set to approve Dow Chemical’s GE (genetically engineered) seeds that are resistant to its herbicide, 2,4-D, one of the ingredients in Agent Orange. What can you expect from a country where successive administrations, including the current one, appoint Monsanto executives to high positions in the FDA (Food and Drug Administration) and USDA (US Department of Agriculture). Possible Democratic Party presidential candidate Hillary Clinton is strongly in favor of GMOs and it’s difficult to imagine a Republican president standing in the way of any corporate activity, so as usual, it’s up to people. The so-called “leaders” are leading the lemmings off a cliff.

People of privilege will always risk their complete destruction rather than surrender any material part of their advantage. Intellectual myopia, often called stupidity, is no doubt a reason. But the privileged also feel that their privileges, however egregious they may seem to others, are a solemn, basic, God-given right.

– John Galbraith, The Age of Uncertainty

3 thoughts on “Your daily dose of poison”