Regarding earthquakes of magnitude 6.0 or greater, the post Earth changes statistical update said:

These days, the planet has one of these potentially damaging earthquakes on average every two and a half days…

Well we’ve just had 27 of those magnitude 6.0+ earthquakes in the last 30 days! So now we’re up to almost one per day.

If we take the strength down to the magnitude 5.1 level that rattled the nerves of plenty in Los Angeles on March 28, there have been 183 of those in the last 30 days, so that’s six per day on the planet.

If you live in an earthquake zone and have been thinking that this acceleration is no big deal, all I can say is: please reconsider your position! Literally! Or, if you want to maintain your position, ask the US Government, they know everything, tell the truth about everything, and they are certain to tell you that there is nothing to see here, move along.

That same US government refuses to fund an earthquake early warning system for California. The US Geological Survey says they can implement one for $16 million. The US can’t afford that, of course, because they are too busy buying tanks that the US Army says it doesn’t want:

but 42 per year are purchased anyway at more than $6 million each. Clearly Congress thinks it’s better to blow people up than to save lives.

And you might be thinking that the early warning system wouldn’t work anyway. Well, there is already one in the world that works quite nicely. In Mexico. They built it 21 years ago–after thousands died in the 1985 Mexico City earthquake. One set of system alarms is at the Mexican TV stations. Here’s a video of a Mexico City newscaster getting the warning (that siren in the background) 71 seconds before he feels the fuerte (strong) movement from yesterday’s magnitude 7.2 earthquake off the west coast of Mexico:

For the record, California also refuses to fund that early warning system despite the fact that they are enjoying another brief budget surplus as they always do when the stock market bubbles over with Initial Public Offerings of companies that are losing money. Yes, 83% of these new stock offerings over the last three months are money-losing companies. Here’s the chart: 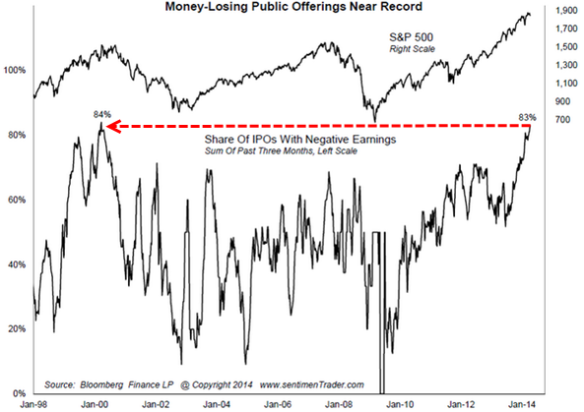 That almost equals the all-time record for such madness of 84% in the year 2000 during the internet/tech stock bubble. Everyone of course now agrees that that was a bubble. But of course they swore it wasn’t a bubble then. And they swear that what’s going on now in the stock market isn’t a bubble. This time it’s entirely rational. So money-losing entrepreneurs and insiders like Suckerberg are selling stock like crazy to the gullible public, filling California’s tax coffers and thus tipping the budget balance to briefly positive for the Golden State.

So, the moral of the story is: Buy the stocks of money-losing companies! There’s no stock market bubble! And don’t worry about that pesky acceleration of earthquakes. Stay put right on those active faults. Your results should be at least as good as shown in this video. I’m sure the peace-loving US Congress guarantees it.

2 thoughts on “Rockin’ and Rollin’”