This is what the mainstream propaganda machine serves to the US public. These are Time Magazine’s covers for different regions of the world for their Sept 16 issue: 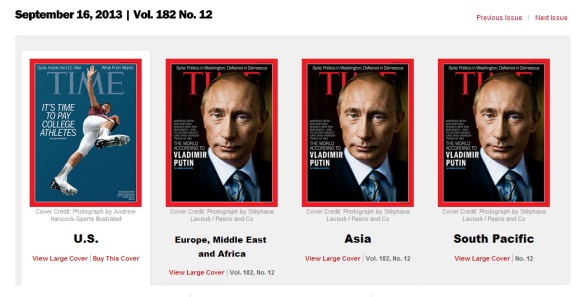 If you think that’s a Photoshopped trick, it’s not, it’s from their web site, here is the link. During the week where Putin made US politicians look like schoolboys in a civics class, the rest of the world gets Putin, and US readers get a real “burning question of our time” story on college football. Sure wouldn’t want to upset US citizens with anything resembling truth, they might end up not trusting their leaders as those politicians coax them to overspend, take on more debt, support the latest war, and vote the same sellouts into office yet again; let’s face it, that might be “bad for the economy” and we must aaaaaaaallllllllllllllll bow down to the economy.

But wait. It gets worse. Here’s a story (one has to go to the UK press for this, in this case the UK Guardian and Glenn Greenwald) that Gen. Keith Alexander, the guy in charge of the US government spy apparatus, spent who knows how much taxpayer and borrowed money that funded some secret budget to have his office re-modeled to look like the bridge on Star Trek’s Enterprise: 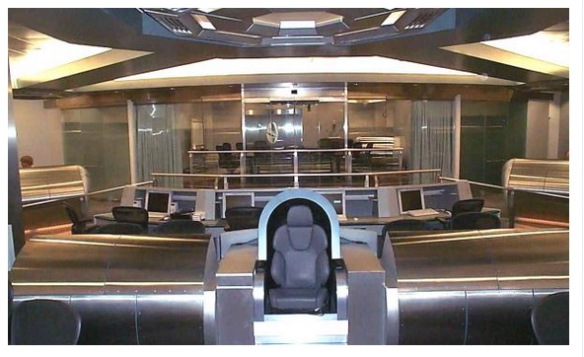 It’s a 10,740 square foot labyrinth in Fort Belvoir, Virginia. The brochure touts how “the prominently positioned chair provides the commanding officer an uninterrupted field of vision to a 22′-0″ wide projection screen…”

This is not a joke. Foreign Policy magazine had this to say:

“When he was running the Army’s Intelligence and Security Command, Alexander brought many of his future allies down to Fort Belvoir for a tour of his base of operations, a facility known as the Information Dominance Center. It had been designed by a Hollywood set designer to mimic the bridge of the starship Enterprise from Star Trek, complete with chrome panels, computer stations, a huge TV monitor on the forward wall, and doors that made a ‘whoosh’ sound when they slid open and closed. Lawmakers and other important officials took turns sitting in a leather ‘captain’s chair’ in the center of the room and watched as Alexander, a lover of science-fiction movies, showed off his data tools on the big screen.

“‘Everybody wanted to sit in the chair at least once to pretend he was Jean-Luc Picard,’ says a retired officer in charge of VIP visits.”

More pictures and commentary are here and here.

And now it gets really sad. The US says that Syria can be attacked because they used chemical weapons. And these are heinous weapons, to be sure. But the US used weapons that spread plenty of semi-depleted uranium all over Iraq and someone, I can’t imagine who, has been suppressing World Health Organization investigations and reports on the immediate and lasting (birth defects) effects of such weapons. I guess “radioactive” is somehow way less bad than “chemical”?

What is not sad is that truth is emerging about these things and many more. And that this emergence of truth is just one aspect of an energetic change across our entire continuum, from greater to lesser density, toward permeability, porosity, visibility. Where it becomes more difficult to hide truth because people can see through the dense places where secrets can be hidden. Where the Earth’s crust opens with sinkholes, volcano vents, and earthquakes. Where people begin to deeply explore what they were told in high school–that everything is energy–and begin operating telepathically: communicating, healing, interacting with vast life beyond the strictly physical. What is not sad is our bright future emerging as we communicate now.

2 thoughts on “The Sad States of America”